***Edit long overdue. No sooner did I post this and we decided to stop buying grapes and rent the vineyards from another viticulture in the village. This allows us to farm everything – from Bhilar to our Single Vineyard wines – in the same manner and control the entire process 100%…from farming to bottle. I will leave this post here for those who want to know how we have evolved over the years.***

Bhilar Plots tinto is a village wine sourced from one vine-grower in Elvillar, Juan Carlos Uribe. But this wasn´t how it began. The first vintage of Bhilar in 2011 was sourced from three vine-growers. We asked them to adjust their farming to reflect our values and at least attempt sustainable farming. We quickly learned that change isn´t always welcome, yet for Juan Carlos change was a breath of fresh air. In his words, he chose to be our sole partner because we are “different and he was he was ready to try something new.”

∼A Matter of Perspective ∼

“Weeds are the sign of a bad vine-grower” a common sentiment and a phrase that Juan Carlos´s father-in-law often directed at him. He was accused of being lazy when weeds started sprouting in his vineyards. But he didn´t care, this was purposeful. I sat down with him hear his perspective. Our conversation revealed that our request didn´t change his thinking, rather allowed him to experiment with something that was always inside of him, “I´ve always felt it is important to get out of my tractor and actually walk my vineyards in order to get a feel for what they need. If you follow a chemical schedule the work can become routine and boring.” He was already walking the path of sustainable farming. 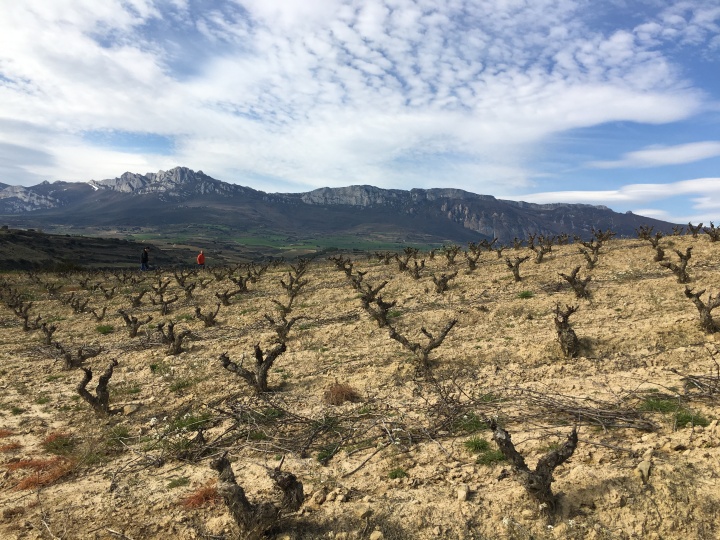 He admits it took some time to get comfortable with the idea of organic farming, but during our conversation his excitement was palpable, “I trust David and his ideas but deep down I´m a skeptic, I have to try something for myself before I believe it. This year is the first year I didn´t use any herbicides or pesticides in my vineyards that go to Bhilar, I´ve only used sulfur and organic copper. In Valmayor, I used organic sulfur so this my first 100% organic vineyard!” We encourage him to focus on quality, not quantity, paying the maximum kilo per hectare permitted, hoping he will bring in fewer kilos of better quality grapes while spending less on chemical products and diesel. He told me he can see the vineyards becoming more balanced, “I even notice more ladybugs. This is a good sign!” If things go well, he will convert more of his vineyards to organic. When I asked if he would ever consider organic certification, he said he would consider it but not until he understands how the change will affect his vineyards overtime.

I asked Juan Carlos his opinion on why more local vine-growers aren´t converting to organic or even sustainable farming, “You have to change the “chip” and have everything very clear in your mind about what you want for your vineyards. Many vinegrowers consider it a risk and aren´t willing to change. Some may consider it if the price for organic grapes goes up, but there aren´t many wineries asking for organic, so the demand is not there.” One of his last statements to me was very disheartening, “My father´s generation will not change and I suspect the same with my generation. It has to be the next generation to implement these ideas.” Personally, this affected me as I recently completed a 6-month viticulture class that often tried to weave organic topics through its contents and I could feel the descent from a majority of the students, many of whom were much younger than I am. I fear they will not veer far from what their fathers have taught them. Perhaps they will evolve over time and as Juan Carlos said, they will “change the chip”.

Age of vines: Range from 18 to 45 years. All planted by Juan Carlos with the exception of La Hoya (planted by his father-in-law).

We are proud to work alongside Juan Carlos and hope that his experiences continue to excite and intrigue not only him but those around him who are willing to take a bold step into new territory. These little changes benefit us all in the end.