Another year has passed, so I’ve decided to recap our harvest, which was nothing short of a miracle for many reasons.

The first fruit of our labor (actually my labor) arrived on Tuesday, September 13th with the birth of our 2nd son. While in labor, David enlightened me with a little nugget of information on the drive to the hospital; in Spain, Tuesday the 13th equates to Friday the 13th in many other parts of the world (he really has a way with words). With that sentiment, I was wondering what little demon would be expelled from my body. Apparently, superstitions are only valid if you are of that culture. Our son was born only 30 minutes after our arrival to the hospital and he’s been quite an angel so far. 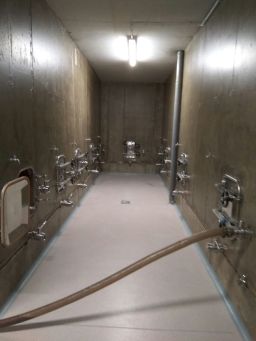 Needless to say, free time nor sleep was very common during the days leading up to harvest. We’ve been working on the construction of the winery for a few years now (yes, I said years) and this year we had no choice and would harvest in our bodega “si o si” as David would say. The production of fruit in the region was so large, he knew no favors would be granted by friends as their space would be at maximum capacity. In the 11th hour, David scrambled to get the winery in condition for the Appellation to authorise us to harvest in our own winery. A nail-biting 2 days prior to the day that David had selected to harvest our first vineyard we got the green light. (i.e. miracle #2)

HARVEST!!! The year started out with a cold and dry winter. February and March brought rain and good conditions to start the cycle of the vine in the coming months. From Bud Break to Fruit Set, the vines were showing signs of a bumper crop. As Spring came to a close the rain started to subside and a hot and extremely dry summer evolved. During the month of August, many areas in Rioja Alavesa reported zero rainfall and there were days when temperatures hovered around 40 degrees, which is quite uncommon for this area. The dry conditions caused some vinegrowers to panic start to harvest at the end of August. The grapes had a lot of sugar but were not mature and ready. We decided to wait and were rewarded by light rainfall at the end of September and beginning of October, approximately 20 liters, enough to complete ripening and offer a nicely balanced grape. In Elvillar, we received approximately 700 liters of rain over the course of the year.

Bhilar post fermentation in concrete tank. Ready for the press

Preparing Phinca Lali for the crush

We started to harvest on October 12th with our Hapa and St. Julien vineyards. After a short break, we continued with our Bhilar Plots vineyards, followed by Phincas during the last week of October. All vineyards harvested prior to October 20th were de-stemmed. After October 20th, the stems were no longer green and ready to be included in the fermentations. We wrapped up our harvest the 1st week of November with our single vineyards. We were very happy to be able to harvest in our new winery, not have to rush the process and to see such ideal grape conditions in terms of quantity and quality.

In short, 2016 consisted of a lot of stress, hard work, and changes in our family yet all of our labours were rewarded greatly by a wonderful harvest in many respects. 2017 is sure to be another challenging, fun and extremely rewarding year for our family as we continue to build our dreams. A heartfelt THANK YOU to all of our friends, fans, distributors and partners who help us make it all happen. We couldn’t do it without you!